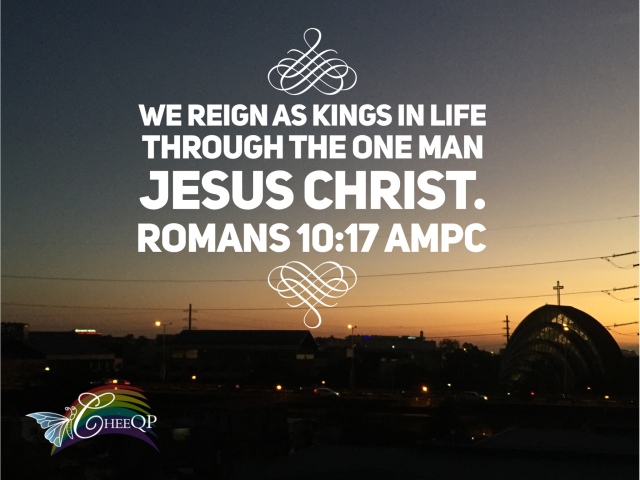 No one has seen our Heavenly Father except the One Who is from Him. Jesus is the exact representation of Him. Jesus only says what He hears our Father saying, and only does what He sees our Father doing. He expresses the very character of God.

“He is the radiance of the glory of God and the exact imprint of His nature, and He upholds the universe by the word of His power.” (Hebrews 1:3)

Reigning in life doesn’t mean we reign because of our possessions, positions and achievements. We reign in life by surrendering ourselves into the Lordship of Jesus Christ, having our wills enthralled in His love. It is allowing His life unleashed in and through ours by the presence and power of the Holy Spirit.  It is becoming like Him here on earth diffusing the fragrance of heaven’s atmosphere wherever we are.

Reigning in life as kings doesn’t mean we rule over other people. No! Jesus Who is the King of all kings powerfully demonstrated how it is to live as the Kingdom of God’s King. All authority was given to Him and yet He served.  He served with the heart of a King.  He bowed low to wash His disciples feet.  He was fully obedient to the Father up to the point of death for the JOY that was set before Him, SEEING you and I reconciled and restored back into the loving arms of our Daddy God.

“So when He had washed their feet, taken His garments, and sat down again, He said to them, “Do you know what I have done to you? You call Me Teacher and Lord, and you say well, for so I am. If I then, your Lord and Teacher, have washed your feet, you also ought to wash one another’s feet. For I have given you an example, that you should do as I have done to you. Most assuredly, I say to you, a servant is not greater than his master; nor is he who is sent greater than he who sent him. If you know these things, blessed are you if you do them.”  (John 13:12-17)‬‬

Reigning in life means receiving and believing what Jesus has done at the cross, washing our slate clean by the power of His Blood  and cleansing us perpetually by the power of His word so that we may come boldly before the throne of grace, fellowshipping and communing with our Daddy God, to intimately KNOW HIM and HIS LOVE experientially.  When we come to know Him, we open ourselves to be like Him. We become Who we behold, empowered to be of greater capacity to make Him known as we walk like Him, not by might nor by power, but by the Spirit of God.

I happened to read a personal note in which I was also one of the recipients. Although it was addressed personally, I have noticed that everytime the writer mentions a name, it always has a title attached to it. My heart was quickened to see something vital to learn from.  Do you know that when we see each person based on their position and achievement we deprive ourselves from building true relationships with them?  I am never against titles in fact we are to do the best we can to attain them if we desire them, but one powerful thing I learned is that the Kingdom of God is ALL about relationships and the only way for us to build and nourish our relationships is to see each one the very way they want to be seen.  By default, people wants to be seen and loved for who they are and not by what they have and do.

In a corporate setting is different of course. There are invisible boundaries. But, come to think of it, why are there corporate outings for team buildings? It is because this is where personal connections and relationships are built and developed away from the atmosphere of heirarchy. We are born to relate to one another. We are born to connect to one another. No man is an island.

If you look at Jesus’s inner circle, He didn’t choose them according to people’s standards. “The LORD does not look at the things people look at. People look at the outward appearance, but the LORD looks at the heart.” (1 Samuel 16:7)  His disciples were lowly with a heart that was quick to believe.  Don’t you think we are called and have been invited to see people the same way?

On the contrary, the Pharisees who were “supposedly” learned in the law, the law that is all about Jesus “concealed”, FAILED TO RECOGNIZE the Messiah (Jesus revealed) all because of their prideful knowledge without experience. They saw Jesus as the son of the carpenter and never believed that He is the Son of God. A religious thinking indeed deprives us to explore and experience Who He truly is, why He came and for whom He came for. It only wants one thing and that is to glorify onself of its own work and worth.

Read this story with me in Matthew 12:22-24, and see the difference how the people and the Pharisees perceived Jesus when He healed a demon-oppressed man who was blind and mute.  The contrast of perception was so defined.

“Then one was brought to Him who was demon-possessed, blind and mute; and He healed him, so that the blind and mute man both spoke and saw. And all the multitudes were amazed and said, “Could this be the Son of David?”

Now when the Pharisees heard it they said, “This fellow does not cast out demons except by Beelzebub, the ruler of the demons.”

Reigning in life is recognizing and acknowledging Who Jesus is.  When we do, we just booked ourselves to be led by our Good Shepherd as He directs us into the path of righteousness, a life so loved that we may love.  The real evidence of someone who knows how to love well is when they themselves are well loved.  We love because He first loved us. (1 John 4:19)

Reigning in life is when we are most aware Who we carry inside of us, giving us the authority and resources to meet the needs of others whom the Lord postures in our paths. We get surprises along the way, just like the parable of the Good Samaritan (Luke 10:25-37). A priest passed by and ignored the beaten man. A Levite passed the same way and ignored. The LAW of being unclean when one gets near an unclean person had a suuperior influence in their lives. But when the Samaritan came by, he saw and had compassion. He bound his wounds up, poured oil and wine. He didn’t stop there. He brought this wounded and beaten man to an inn, paid to be taken care of.  The power of LOVE indeed supercedes the power of the LAW.

Reigning in life is to be able to allow our lives to be conduits to others that they may come to know Jesus in a very personal way by the way we live our daily lives. Words are cheap. Our words are supposedly expressions of what lies beneath and are demonstrated by our deeds. Intimacy with Him is the key and the firm foundation for us to build relationships. It is in our connectedness to the Vine that allows our perception towards others to see each one as a person and not as a project.

Prayer: Heavenly Father, thank You for Jesus Whom You sent that we may come to know You and experientially know how much You love us by the presence and power of Your Spirit. Amen!

2 thoughts on “Reigning In Life”