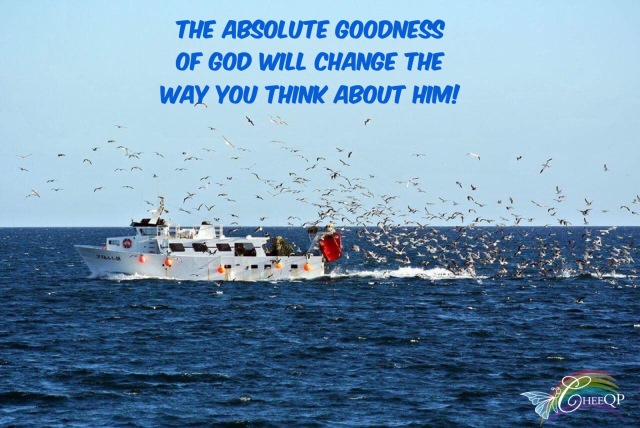 Encountering God’s demonstration of power that so captivated your heart changes the way you think about Him.  God is GOOD!  He is GOOD ALL THE TIME!  Only GOOD things come from a GOOD GOD!   He cannot give what He doesn’t have!  And if He is GOOD, then, only GOOD and PERFECT gifts come from Him.

A lot of times, we view God according to our own experiences.  If bad things happen to us, we sometimes blame Him that results in keeping our distance from Him.  The good news is that HE IS NOT INTIMIDATED BY HOW WE SEE HIM, or shall I say, how badly we see Him.   ALL He is after of and longing for is for us to KNOW HIM DEEPLY and INTIMATELY!  When we come to know the truth of Who He truly is and who we are in His sight, then it sets us free and elevates our knowledge of Him that He indeed is a GOOD, GOOD Father.

I love the passage in Luke 5 about Simon Peter.  It says there that a multitude pressed about Jesus to hear the Word of God and He got into one of the boats which was Simon Peter’s.  He asked him to put out a little from the shore, sat down and taught the multitude from the boat.

When He was finished, Jesus told Simon, “Launch out into the deep and let down your NETS for a catch.” (Luke 5:4).  Peter put out his NET (mind the word NET although he was told to let down his NETS) and the fish were so many that the boat began to sink.

“But Simon answered and said to Him, “Master, we have toiled all night and caught nothing; nevertheless at Your word I will let down the NET.”  And when they had done this, they caught a great number of fish, and their net was breaking.  So they signaled to their partners in the other boat to come and help them. And they came and filled both the boats, so that they began to sink.” Luke 5:5-7

There are too many treasures of revelations in this story.  One, is that when Jesus tells you do something and you obey regardless of your circumstances (here, Peter and his partners toiled all night and caught nothing), His Word becomes flesh.  His Word manifests.  His Word becomes a reality before our eyes.  Two, is that even if Peter just let down his NET and NOT NETS, he still caught a net-breaking, boat-sinking number of fish that caused them to call their partners to come and help them.  I wonder how many fishes MORE he would have caught had he let down his NETS!  But anyway, just imagine that vast supply of fish.

As soon as Peter saw the display of POWER, a supernatural abundant supply, a miracle of provision, it brought him to his knees.

The unmerited favor of God fell on Peter that made him SEE something he hasn’t seen before.  THE GOODNESS OF GOD WAS DISPLAYED WITHOUT PUTTING A QUALIFICATION ON PETER.  All he did was obey and he saw something extraordinary.   As a result, Peter was in confession!   He was in repentance!  And the most powerful thing that happened was, Jesus NEVER preached to him.  All He did was DISPLAY THE POWER OF HIS LOVE AND GOODNESS.  A miracle brought Peter to repentance.

The definition of REPENTANCE in Greek is “METANOIA” meaning A CHANGE OF MIND or THINK DIFFERENTLY.

“For he and all who were with him were astonished at the catch of fish which they had taken;  and so also were James and John, the sons of Zebedee, who were partners with Simon. And Jesus said to Simon, “Do not be afraid. From now on you will catch men.”  So when they had brought their boats to land, they FORSOOK ALL and FOLLOWED HIM.”  Luke 5:9-11 NKJV

Once our thinking changes, our lives directly conforms to it.  Our lives will go according to our most dominant thoughts.  When we are captured by how good God is, then it woos us to obedience knowing that SURELY GOODNESS and MERCY shall pursue us all the days of our lives when we follow Him.  His goodness draws us to Him and never drives us away from Him.   Just like being with a person who demonstrates his deep love for you, such gesture will not drive you away from him but it will woo you nearer and closer to him.

Peter then forsook all and followed Jesus.  When you and I get touched by His love, we will surprisingly find ourselves following and pursuing Him effortlessly.  He is altogether lovely, altogether worthy, altogether wonderful for you and me.

That’s our God and He desires to be known that HE IS LOVE!

“Or do you despise the riches of His goodness, forbearance, and longsuffering, not knowing that THE GOODNESS OF GOD LEADS YOU TO REPENTANCE?”  Romans 2:4 NKJV